We always get nervous on Burn day. Ever since 9/11.

If our current administration is evil enough to give orders to stand down while the World Trade Centers fell, then they’re evil enough to drop a bomb on America’s largest concentration of smart and revolutionary freaks and try to blame it on “the terrorists.”

Luckily, though there were two shockingly huge explosions (the Man and Crude Awakening), they were both on purpose. We think. 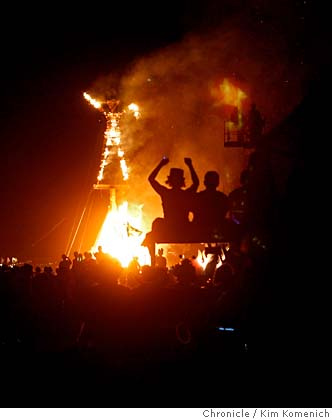 first the Green Man, then the Black Man, and now: Disco Man

We played til sunrise on Thursday and slept all day Friday, then ran a crew of MOOPers at the Gate at night. That’s both the verb and the noun for Matter Out Of Place, or to pick up said MOOP.

The volunteers quite enjoyed the experience of picking up other people’s trash off of hard-packed alkali dust floor outside while the world’s best party raged on a mile inside the Gate. While sifting through the dunes accumulated around a large pile of palm fronds — which irresponsible ticketholders dropped off in D-lot rather than return to somewhere besides the playa like we told them to, so they could hurry up and get inside — one volunteer commented how he felt like he was tending an environmentally-responsible Zen garden. See? They’re cute.

Volunteers who end up out at the Gate share a commonality of being overloaded on the crowds and noise inside Burning Man proper. We all sat on the ground in D-lot with nothing around us but little tiny pieces of plant matter which won’t biodegrade … wanting to be on the outside, away from the action, watching the City and the light of wasteful-but-pretty propane fires from a distance.

The volunteers enjoyed looking at the weird clouds which we convinced them hid spaceships, and they loved listening to the radio chatter, and absorbing the “vibes” from afar. Zen garden — we second that emotion.

We saw him too, but only just in time to get a glimpse in the passenger window at his profile. It could’ve been him, for sure. They ID’d him but the name on the license didn’t match up. Well, DUH. Don’t forget how smart Paul is. We’d carry a fake ID too.

Where once we felt the rage of sonically being pounded into the ground in one place over and over and over — we now feel cleansed.

We thought about skipping the DPW parade before the Burn. Some prevailing attitudes during the parade had gotten nasty in the past couple years. You’re not supposed to rampage people’s camps for beers who don’t want to be rampaged, and you’re not supposed to yell “FUCK YOU” to folks who have just given you a beer.

The order goes like this: Pile on the cars and yell “FUCK YOU” or stick up your middle finger and holler “WE’RE NUMBER ONE” or “TWO WORDS FOR YOU, HIPPIE: PANTS!” — and then participants toss you beers like ticker tape and then you say thank you and go back to being a fake asshole.

Luckily, everyone else was on the same page, and the parade was good clean controlled chaos. We’d planned on packing the back of Cowboy Carl’s truck with a bunch of hot chicks, but instead we piled on top of a Gate fleet van and (of course) blared “Sexy Back” over and over. Much whiskey was endrankenated and thank goodness we offset it with enough coffee to avoid falling asleep before the Burn.

Because Arwen made the masks that hung at the base of the Man — which was proudly rebuilt by the DPW in literally two days after the Paul Addis early burn, like we said it would be — we scored Inner Circle tickets, and watched the show with our other friends who built and guard the City.

Front row! Us, the firemen, and then the Man. A small reward for months of hard work for pennies. We get paid in experience, so sorry for the teeny gloat there, but FRONT ROW. Fire fire fire!

This year’s Man Base — massive tree trunks (hopefully from ‘fallen’ trees), piled into a teepee shape and bolted into place, basically — gave the statue a now-more-than-ever similarity in appearance to the Wicker Man, which was nature-creepy, and heartened us with its clean design and simplicity.

He burned long and strong, and when he fell and everyone rushed the center, we rushed the other way, back to the cars (how American) to roll to see Geno and Mark Perez’s massive oil rig tower burn. Which was the best fireworks show we’ve ever seen in our lives.

Also reportedly the largest controlled explosion ever, or something. It was purty. They blowed it up real good. Haters? That was fuel NASA was scheduled to throw out anyway. Dan Das Mann and crew repurposed it for art.

And now, after Camp Carp’s Black Sabbath Pancake Breakfast — our favorite event of the year — it’s back to work. The tourists will be pouring out of the City for the next two days and we’ve got to look in the back of all the trucks to see which karmically doomed assholes are stealing everyone’s bikes. It happens every year. We don’t mind missing the Temple burn — we hope we get to catch a bicycle thief.