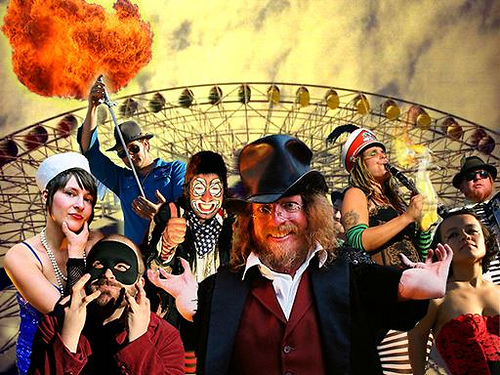 Sam X is an herbalist with a double-major from the University of Colorado in anatomy/physiology and botany. She’s also a massage therapist, a midwife, and a devoted mother of two. She lives part of the time on a collective farm in Mexico, she’s got green dreadlocks, and she plays clarinet and sings in a hobo jug ensemble called That Damned Band.

But she’d tell you her main career focus right now is the 999 Eyes of Infinite Dream circus. It’s the world’s only current traveling freakshow and museum that boasts real freaks, like a lobster-claw accordion player and a half-girl gymnast.

We once saw SamX feed a Madagascar hissing cockroach to a shoeless hillbilly with overalls and a mountain-man beard and a corn-cob pipe two Pedal Monsters ago. Maybe we’ve talked about that in these pages before, now that we think about it, but that was really impressive, especially because he told us beforehand it stung his tongue really bad every time he ate one, like for a day or two.)

999 Eyes cirkus: puttin the “freak” back in “freakshow”

SamX gave us this recipe for a mixture of herbs that’s meant to be made into a tisane to clean out livers, purify blood, clear away mucus, combat stress and depression, build red blood cells, lower cholesterol, shove poison out of everywhere in the body … and generally cause the drinker of said beverage to become so naturally energetic they might be tempted to dance around like a hyperactive hobo on crack, causing friends to wonder aloud if the drinker has suddenly taken up a cocaine habit or joined a smiley-face doomsday cult.

But things only get REALLY over the top if you decide to throw in the Siberian ginseng.

(P.S. Don’t mix ginseng with coffee if you don’t want to come down with … well, something that some people think is funny, but it’s really hot and runny.)

Anyway. Hobo Crack tastes like actual tea, especially if you sweeten it with honey — but milder, packed with vitamins, and more flavorful. And it makes you feel kind of superhuman, with no help from caffeine whatsoever.

So. Proceed to your favorite crunchy-granola health food store that sells dried herbs. You’ll be able to spot this section by all the Stevie Nicks clones and Wiccans with 10 feet of dreadlocks tucked under their tams milling around a shelf-row of glass jars like witches on their way to a business meeting ’round a cauldron.

Purchase one ounce each of the following dry herbs. Mix them all together in a big Ziploc bag or jar, and boil a mess of water. Add one tablespoon herb mixture per pint of water once it’s boiling, stir it, and turn it off and let it sit and steep for about 12 hours. Then strain it into a pitcher or pre-cycled water bottles and refrigerate it. It’s plant matter, essentially, so it only stays good for a couple days. You’ll be able to smell when it goes bad.

If you can’t find some of them, that’s okay. In fact we’re sure there are other herbs to add to the blood-building, out-cleaning mix of it all (suggestions welcome). Whatever you do to Hobo Crack, the flavor doesn’t change all that much unless you add a pinch or two of rose hips, hibiscus, and/or lemon balm.

So that’s the thing Otto says you can survive on for 6 months if there’s an electromagnetic pulse or the Great War of the Californias.

And no, it doesn’t taste good with vodka in it. That’s just wrong.