Okay, California. We totally love you — so much we now say “totally.” A lot. We never used to say that before. Also, we catch ourselves saying “right on” every once in a while, but we’ve still managed to hold out on the whole “hella” thing. Anyway.

California is the best and we love it. We think we proved that over a decade ago when we threw everything into the car and left Chapel Hill and drove straight here. We’ve been faithful to Cali ever since. However, with that trip we took to the restaurant the other night, and the way-too-much we spent on food there we didn’t really even eat, we think there’s something you need to know.

YOU DO NOT MAKE FRIED CHICKEN WITH BREADING. YOU DO NOT. Bread, breading, breadcrumbs, or any other bread-type item is NOT involved in the making of real Southern-fried chicken. NO BREAD. 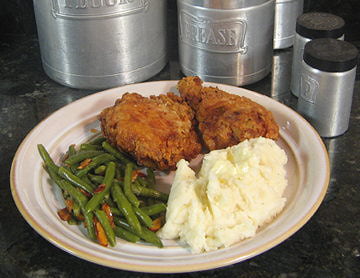 Rather than browbeat you for it, we’re just going to tell you what Momma told us when we were a wee lass in the fields (okay, suburbs) of Tennessee.

Incidentally — and we remember it well, because we were all SO proud — a week or two after we first learned to make our family fried-chicken recipe, there was a special on 20/20 or somesuch other news program where a reporter went around the country trying to find the absolute best fried chicken recipe on the planet. Mom wasn’t on the show, but the lady who won, out of all the recipes, did her fried chicken the EXACT SAME WAY as Mom.

Now, with her permission, we’d like to share that information with the world. The fried chicken situation in California has gotten dire. We can only guess that the rest of the planet is forgetting, too. Or maybe they just never knew. At any rate, this is no time for secrets.

Flour goes in one flat bowl. Egg, whipped with the fork, goes in the other. Salt and pepper (don’t be stingy) go in both; fork ‘em again.

You can dip it more times than that if you like. You can also take the skin off if you’re worried about fat — it’s still so delicious it’ll make you want to slap somebody.

That’s the important part: FLOUR TWICE. Also: Deep grease, and HOT. How much oil? Enough to cover half the chicken when it’s sitting flat.

Annnnnnnd fry it up. Put a lid over it to steam it as it fries, and then take the lid off to crisp it up at the end. Flash-fryer might be better but we never had one o’ those.

See? It’s easy. You have no more excuses. Next time we put fried chicken in our mouth and it’s got BREADING on it, we’re going to call Momma. And THEN you’ll be in trouble.