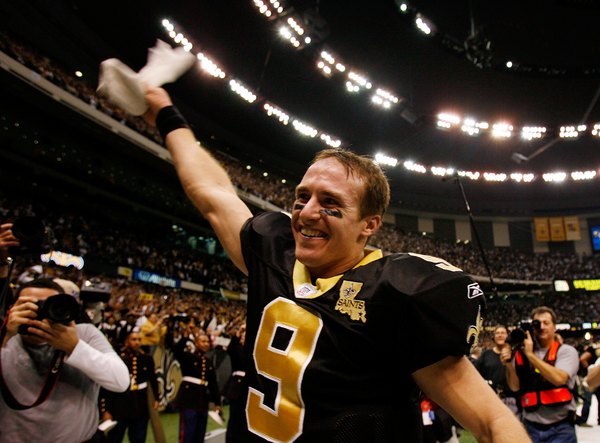 Sitting at the Superior Grill on St. Charles Avenue right now, we are watching the Saints and Vikings game, surrounded by other punks who normally don’t give a rat’s hind end about football. Ever.

But this is the joy and the hope and the promise and the wonder of the New Orleans Saints. We love them because, first and foremost, they include the words “New” and “Orleans.”

Yeah mom. He's awesome. Tall, handsome, and rich. His name is Drew Brees. The bad news is he's already happily married. But the good news is he's the quarterback for the most stylish NFL team in the universe (WHO DAT) and if we end up marrying him, our name will be Summer Brees

The electricity in the air in New Orleans at this moment in time is incredible. As far as anyone knows, as of this writing, by February 6 we will kick off a brand new mayoral race, and by February 7 we will be Superbowl champions. Currently Miss Led is freaking out because the Vikings are up by 7 AND they have the ball. But we remind her the Saints never start playing until the third quarter anyway. This is going to be a DOGFIGHT. 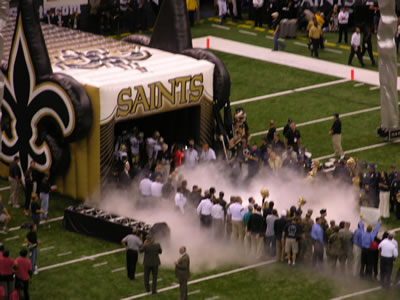 Also mixed up in NOLA’s person-to-person electricity is the whole Haiti earthquake calamity. It makes the mood bittersweet, to say the least. Death toll: estimated 200,000, with another 250,000 injured and a million homeless. Several close friends report tearful outbursts on the daily. A handful are making travel plans to connect with the appropriate people and go use their wilderness medical skills down there. Heroes!

The other night at yoga class, we got on the mats and dedicated both our practice and all the money to Doctors Without Borders. Some would pooh-pooh this as a useless endeavor for bliss ninnies, but those people sit on the couch and do nothing.

Indeed, there is no proof it actually helps, but in the land of quantum physics, it does. To get up a circuit charge with 50 people in a sweaty room full of love and heartache, to pray and strain at the same time, felt … cathartic, at least. 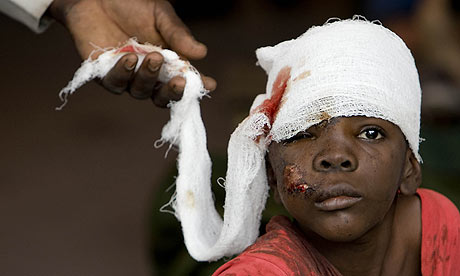 this kid don't give a SHIT about da Saints. and we all wish we could do something about it all...

Not only is Haiti a stone’s throw away from here — it’s also New Orleans’ spiritual home and forebear. Voodoo comes from there, as do a lot of the people who were born and raised here. Both of us taken over by the French and later emancipated, to varying degrees … now both wracked by natural disaster and the failure of man’s systems and buildings.

Both NOLA and Haiti feel (justifiably, at times) to be the lowest rung on the ladder, but with the highest concentration of culture and flavor … anyway. There is a definite string between here and there, a big electric string pulsing with love and empathy and hands-in-the-air what-do-we-do-nowness.

this, we guess... yep, we feel like this sometimes

The hot news at work today was that Lil’ Wayne is a traitor — a bigger Brett Favre fan than a Saints fan. The New Orleans native and MEDIOCRE RAPPER is somewhere either in jail or in a hot tub right now, cheering for the Vikings. The Vikings! … For this, many will never forgive him.

Yeah, we know. Who ever thought we would care. But New Orleans NEEDS THIS. Needs it SO BAD.

Oh jeez. It’s halftime and tied at 14 all. Impossible to type any more. Our nerves …

yeah mom, we know. He's way hotter than Drew Brees, but then our name would be Summer Bush -- not as cool -- and also Kim Kardashian would take her unnaturally large ass and sit on us to death. WHO DAT!!!