We finally saw the movie Avatar last week. It seemed like a documentary (considering). The bad guys destroyed everything and left. You can’t un-destroy nature.

We’re glad this movie was made. We find ourselves hoping someone would give Kindra Arnesen, the noble voice of the Gulf, a bow and some neurotoxin-tipped arrows:

Please watch this clip. Our friends at Project Gulf Impact filmed Kindra recently too, and ended up hospitalized. All three of them. This is not uncommon during the BP oil gusher days, to go down the Bayou and come back poisoned.

Doctors gave them some hogwash non-petroleum-related illness excuse, of course. Everyone’s afraid of BP, Halliburton, and our own military. Also, doctors don’t want to rack up non-billable hours testifying their way through the court system for the rest of their lives.

We know it’s hard. It’s hard to look at. All of it. This is very serious. We do not like seriousness, and we resent having to be serious at all. We would suppose regular readers are wondering where this blog’s Gulf Coast coverage is at lately.

Well, this writer is now what is known as a “drifter.” All the way ‘cross the USA, in the Bay Area, we’ve come to our old pre-NOLA stomping grounds, couch-surfing around and trying to figure out where to get a job and where to lay our heads, and when they’re going to stop spraying Corexit so we can get back to our house in New Orleans, to keep fixing it up (or should we sell it? argh) and sit on the roof and watch the sun set over the River. We can’t maintain our property and protect it from crackheads from all the way over here.

Can we file a claim with BP? No. Can we sue Halliburton for emotional distress? No, we’re sure we can’t, and even if we could, the struggle would make us bitter. (More bitter.) We don’t want to play with those guys at all. Ever.

At least two writers are totally on the same team — 1) Opal from Opal’s Mountains is married to a refinery worker, with two kids, and has decided to change her family’s lifestyle and move them out of harm’s way. 2) Bayougirl lives in the Gulf, and she’s pissed that her home is being destroyed. It’s nice to read the same thoughts coming out of someone else’s head, and to see the same mood swings in another. It’s nice to have a ringside seat at an awakening.

The planet is breaking out and rupturing its discontent … our energy-mining has gotten completely out of control … we can’t really put our heads around it all, same as everybody else. We want to swim in Gulf Shores in the Southern fall, and fish in the Bayou, and learn to hunt nutria, and collect driftwood on the banks of the Mississippi without inhaling too-many parts-per-million of the military-industrial complex’s chemical slurry. But that is not possible. Not right now. Or maybe ever.

The chemical poisonings have been detoxified out of us with FOOD SCIENCE, and we brought our weight up from a scary 105 (at 5’7″) back to a healthy 125 or so. Ice cream, lots of ice cream. Dairy draws poison out too. Delicious.

“Members of Congress should be compelled to wear uniforms like NASCAR drivers, so we can identify their corporate sponsors.” – Robin Williams

We’ve finally stopped having panic attacks when riding by a body of water, but we still would rather keep our eyes on the land or houses on the other side of the road. When there’s water around, in California or Texas or even on a movie screen, we can’t NOT look for oil, and oiled birds and mucky marsh grass and dolphins in distress. Not yet.

Imagine watching this all go down as a fourth-generation oyster-farming family, unable to process the enormity of it all, and just as flatly unwilling to abandon ship as the Na’vi from Avatar. The Cajuns and Indians are not going to leave. They’re STILL watching their fragile home being destroyed, and collecting and submitting scientific evidence which either “goes missing” or is quashed by goons protecting the criminals in charge. Still. 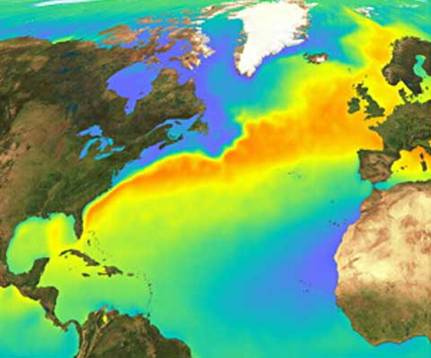 thermal imaging of the Gulf Stream’s trajectory. Why are there no hurricanes this season? How cold will Europe get this winter?

We didn’t really know what a panic attack was, as we’d never had one, until Fitz drove us the other way around to the place we were going and surprised us, tough-love-style, with a view of the Pacific Ocean, because we had been specifically avoiding it. If there were that much oil in the San Francisco Bay, and that much FAIL on the part of the companies cleaning it up … we’re pretty sure there would be riots and burned cars in front of S.F. City Hall by now.

We’re not saying a disaster that big in the Bay Area would be met with a superior response plan or non-shadowy, non-corrupt non-leaders. We’re saying they didn’t go through the hell of Katrina already … and there are too many cameras snapping at the Golden Gate Bridge and Alcatraz to be shooed away.

Louisiana is FLAT. Ain’t no high vantage points in the Bayou from which to aim that telephoto lens at Blackwater tents where dead burned whales are supposedly being exploded and “processed ” … At last, though, in the Gulf Coast, one Warrior woman has caught footage of a Corexit plane flying at night — but it’s dark, and there’s no way to prove she’s not lying about the smell that knocked her down, or the sticky film on her car afterward.

The oil is coming ashore as thickly as it ever was in some places, six months later. Six months later, and the story is off the news. The oil that “isn’t there” is still being sunk by secret Corexit poisonings rather than sucked up by Kevin Costner and James Cameron. But we are getting closer to some big truth caught on film. The anticipation of this eventuality keeps us going, and we know we’re not alone.

It’s more true than ever in this Oilpocalypse that, even if there’s rock-solid evidence to back it up, the bearer of damning news is considered to be a conspiracy nut — though the White House and the other perpetrators of the largest un-punished environmental crime in the history of the world are the ones who are lying about everything they’re not CONSPIRING to cover up.

We heard an un-proveable, off-the-record tidbit from an activist who heard it from a scientist that Corexit contains napalm. Like, actual napalm. Of course, a rumor like this would probably remain unsubstantiated. 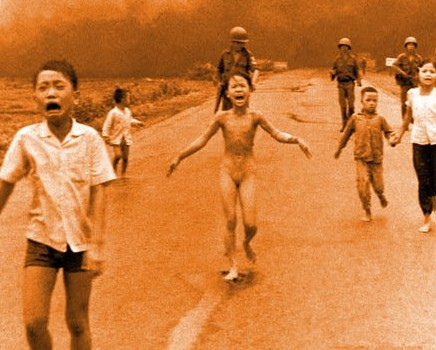 ask anyone who’s ever been caught in a Corexit bombing — it feels like this, but thin spray instead of thick jelly, in slow-motion, minus the stuff on fire in the background

So what should we do with all that napalm left over from Vietnam? … Maybe it’s already being done. Maybe it’s being gotten rid of, the way “they” do with fluoride. Just throw it in with the other stuff; it’ll dilute with the rest of the petrochemicals, and those kooky citizen journalists can’t afford to test that spray on their windshield …

And Wikipedia says that “a simple form of napalm can be produced by dissolving polystyrene in gasoline or a similar fuel.” So, in a way, any time plastic (boom, boats, synthetic rope) touches crude or Corexit — around workers and families, spreading through the water and fanning out in the air — it basically makes napalm.

At any rate, according to the Deepwater disaster’s other furious angel, Dr. Riki Ott, whatever they’re spraying is in those planes caused our own Navy to suspend operations in the Gulf, while they told the American people it was safe to go in the water and eat the seafood.

They are still telling you that. 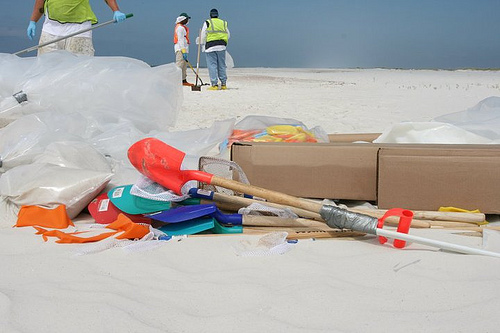