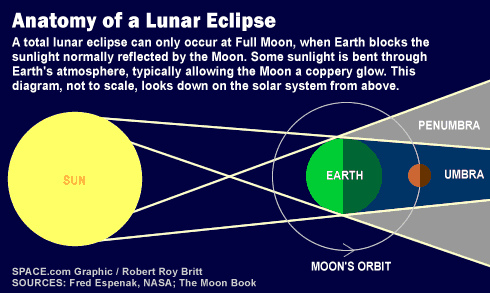 There’s a massively heavy planetary thing coming together in the skies today. Some people believe that if the moon can pull the tides around, the arrangement of the planets in the solar system may affect the magnetic and energy fields on Earth as well.

They call it “astrology,” and when we were growing up, it was strictly forbidden Devil worship. Now, we’re more on the moon-tides side of the control-via-fearsome-God debate … and after over a decade in northern California, we’ve absorbed enough information about it to come to see some patterns in the chaos, and can even guess people’s “signs” with some accuracy, even though we feel like a dirty hippie every time we get it right.

Even if you think it’s all hogwash, it still can’t escape your wonder when the Earth, sun, and moon all line up together, causing a total lunar eclipse, on the same day the sun seems to stand still.

Before there were clocks or anything, people would get a little freaked out when the Winter Solstice would make the sun shadow stop moving (see below) and they’d pray and dance so the days would start getting longer again.

And a total lunar eclipse in the exact same 24-hr period as the rebirth of the sun? Whoa, that hasn’t happened for 456 years. It’s the end of a bloated, useless, gluttonous era — purification, enlightenment, a scratching away at the dark shadows, a resurrection after totality of night, and the tumultuous birth of something new. A new Sun.

It is even widely theorized that Jesus Christ is the sun, which in winter solstice is reborn after a couple days’ catatonia to make the days longer again so the plants can grow. At least ’til the Monsanto terminator seeds and Corexit wipe everything out and all the honeybees are dead from that EPA-approved pesticide. BUT no doomsday today. Dawning of the Age of Aquarius, etc. [PUSH]

“GON KIRIN” – Doyle and Fitz built it, and Gaspo lit it up style

Enter Gaspo, a.k.a. Scott Gasparian, a superhero of sorts who started out as an Air Force cadet and ended up a MacGyver-type mountain man — paragliding, designing lighting systems for giant Buddhas and 70-foot articulated metal fire-breathing dragons, and making antennas out of pipe cleaner and chewing gum and calling up the International Space Station so the kids in his class can talk to astronauts. (Yes, we’re serious.)

He’s always watching the sky, among other things. He analyzes weather patterns and understands electricity and the movement of energy in ways right-brained folks will never understand.

Gaspo was watching the Deepwater Horizon ROV feed at the same time we were, the night they put a “cap” on the spewing well (do you put the cap back on your car’s radiator when it’s overheating?) and so, on opposite sides of the country, we stayed up all night, linked by social media, and waited for the inevitable.

Gaspo caught some of it on film, but he switched to still photos right before it blew, and we saw it and wrote about it, and then Obama made an unannounced press conference to lie that everything’s fine, and nobody said or did anything else. Which was baffling, and still is.

the white bits on the sonar are either gigantic bubbles of oil or methane, from when the capped well ruptured and blew the ROV camera hundreds of feet off the sea floor, with oil rushing past it to the surface. Gaspo screen-grabbed this image, before they cut the feed and didn’t even bother switching to looped sonar footage

ANYWAY, that was a long-ass intro. So without further ado, here’s Gaspo with the weather report:

It seems that everything we look at in the Universe is slightly off-center.

Our Sun wobbles and dances with faraway partners, the Moon has variations in its orbit, and of course, our own Earth’s axis is slightly tilted with respect to our orbit around the Sun. This might be the curse of the observer, or the signature of a (drunken?) Grand Creator. Either way, it makes for a lovely rhythm to our Life on Earth.

My first lesson of the stars started with a flag. No, not Old Glory, but more precisely, the flag pole. Any old solid straight stick in the ground will do — fence post, street sign, telephone pole — just as long as it doesn’t move around much.

Find or make a good shadow stick.
Find 3 stones, or other objects that won’t blow away, to mark the shadows.
On the flat ground at the “end” of the pole’s shadow, place stone #1.

Wait 15 minutes or so ’til the shadow moves along, and place stone #2 at the tip end of the new shadow.

Again wait about 15 minutes, and place stone #3 at the tip end of the new shadow.

The timing is not really critical at all — just wait long enough so the new shadow is easy to distinguish from the previous shadow. Taller shadow sticks have faster-moving shadows.

Every year, near December 21-22, the lengthening noon shadow will appear to “stand still” and not grow any longer. Then as the daylight hours get longer again, the noon shadow gets shorter each day ’til it reaches its shortest, near June 21-22. These two times of the year — when the Sun (Sol) shadow stands still (sistere) — produce the Latin origin of the word Solstice.

Remember the off-center part? If you put a stone every day right at the shortest noon shadow of the day, the shape traced by the traveling noon shadow over the course of a year forms a shape called an Analemma.

So here we are, way out at the end of the longest shadows, and along comes a Lunar Eclipse. A Full Moon happens when the moon is exactly 180 degrees opposite the Sun with respect to the Earth. Since the Earth’s tilt and the Moon’s orbit tilt are not aligned, most full moons pass higher or lower than the Earth’s shadow, and thus we see a bright full disc moon once a month. A Lunar Eclipse happens when the Moon’s orbit at full moon crosses (nodes) into the same plane as the Earth and Sun. These two functions align two to five times per year, for varying levels of darkening of the Moon. So a Lunar Eclipse is quite common, cosmically speaking, although complete blackouts of the Moon — a “total” Eclipse — come along average once every or every other year. To have an Eclipse on or near the Solstice is a much less common event.

According to the experts at NASA, we get a double shadow event this Solstice. Scroll down to 2010, and you’ll see for December listed:

These times are UTC, which is 8 hours ahead of PST. So, the peak of the darkness of the Moon will be at 00:17 Dec 21, which is either late Monday nite or early Tuesday morning, depending on your glass. Then the shortest day of the year, with the longest shadows of the year, will be at 15:39, or 3:39PM, Tuesday Dec 21.

From the first caveman days, the Analemma has traced the course of the sun across the sky with every shadow or ray of sunlight, and is quite possibly the origin of the symbol for infinity. Lunar and Solar Eclipses have historically been associated with times of great or significant changes in the affairs of mankind. With these two shadow events together on the same day, it serves to punctuate the true nature of the winter holiday season, reminding us that no matter our religious beliefs, we owe our entire existence to the Sun.

So for all my Faithful Friends,

for this very special Mid-Winter’s alignment,

call your demons in from the shadows.

show them it is even darker where you stand,

while the Sun holds still for her,

dance along with them under the bleeding Moon.

tarry them till sunrise,

then bid them farewell

as the Sun reigns in its Shadows.

(Bonus: what kind of shadow does the Moon trace out over the year?)