Yep … It’s called the “Matterhorn Field,” and it’s owned by W&T, whose stock tanked Friday afternoon … they say they stopped it already, but whatever. We’ll believe it when we see it. … ::sighs heavily:: … Apparently it’s 100 miles long by 5 miles wide, even though the Coast Guard is saying it’s “3 to 100 miles long.”

Of course the Coast Guard dismissed it at first as sediment, and then “sheen,” and then, even as full-hearted Louisianan elected officials began to weep, the Coast Guard “tested” it and said it was a mixture of oil and sediment. You mean, like, mostly oil, right?

Having been up close enough to test Louisiana crude ourselves, we can vouch that the smell of oil is UNMISTAKABLE and OVERPOWERING. Especially when you’re SURROUNDED BY IT. Under pressure, though, you can “test” water to show anything you like.

You can test water samples in such a way that your commanding officer breathes over your shoulder and hangs a picture of Matt Simmons (RIP) on the wall inside your cubicle, and then magically, you don’t see hardly any oil at all. Is how this bullshit is playing out now.

Authorities also state vaguely that the oil near the shore (unmistakably oil, to everyone who lives there & witnesses it) is from a different “well-plugging operation” than the 100-mile-long, rainbow-sheeny ribbon of “sediment” our citizen journalists photographed in the air.

Well, rainbow-sheen might appear on the surface of the water if some old Deepwater oil they sank with Corexit had been dredged up, but so far that cocktail combination has just turned to muck, foam, and BP ‘sea snot’ — all rainbow-less.

As far as our i-reporters can research, no dredging projects are currently being conducted in the area — especially none which could cause a 100-mile ribbon of rainbow sheen. But we should give them the benefit of the doubt. Big Oil LOVES (*to rape) Louisiana.

It was an accident….they didn’t mention. For 2 days while they tried to cover it up. And are still lying about. What’s not to trust? 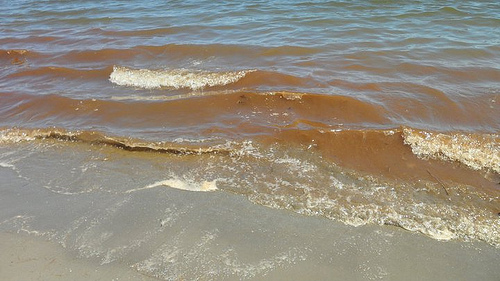 all ground photos (c) the heroic Mac Mackenzie of NOLA ER dot org, who rushed down to Grand Isle and took pictures on Sunday March 20

How a new oil spill will feed that algae, already out of control. Regardless, this Spring Break, those lab-created Mycoplasma mycoides — oil-eating synthetic bacteria of Craig Venter’s, named “Synthia,” with a “computer program for a parent” (see links below) — those Franken-bacteria will be going crazy at the lunch counter, sucking up oxygen in the process, which creates tons more algae that should NOT be there, in the COLD, washing up onto once-white Florida panhandle beaches like a bad sci-fi horror movie.

Conveniently, this algae, which they hope kills the Gulf of Mexico as a tourist and fishing entity forever, will be used to power the military’s vehicles with synthetic algae-based biofuel which has already been unleashed into the world’s oceans.

F*@#$.)@(*&%K! … Do yall get the quantum leap of f**kery between “genetically-modified” organisms and straight-up SYNTHETIC ones? … Disaster capitalism MUST END. These are OUR beaches and marshes. NOT THEIRS.

And nevermind the huge sticky underwater tarmats and beach-hugging oil-slicks being served up on a platter and stuck to the feets of Spring Breakers this week, who cluelessly bound out into the same surf that put Paul Doom in a wheelchair.

As C-130s and helicopters continue to buzz Gulf Coast houses while they spray Corexit (and copper, iron, phosphorus, and whatever else feeds that Franken-bacteria) in low-flying night missions, pre-dawn workers spirit away the stillborn baby dolphins and other carcasses from massive fish kills, which would otherwise serve to annoy capitalists on the boardwalk who would rather pretend everything was hunky-dory, as if their lives depended on it, which they do. 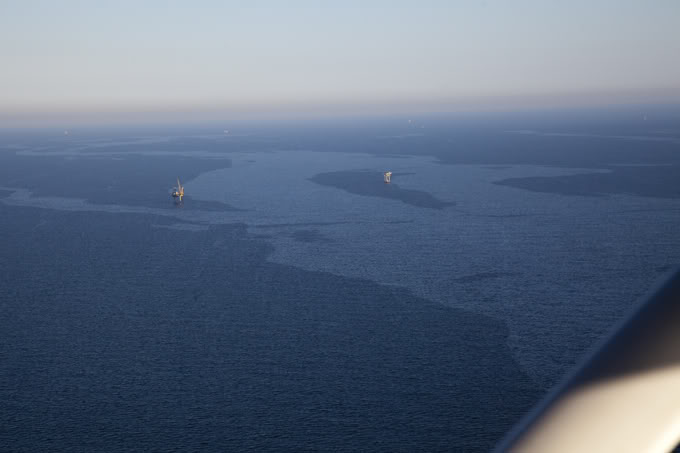 So now, on top of the first wave of springtime FAIL and SAD HEARTBREAKING DEATH caused by the Deepwater, we have a new oil spill with horrifying images to kick the PTSD back in. Woooo, Spring Break! 28th Amendment for the Separation of Corporation and State.

(You can do it. Start in your own town. Get your city council to adopt a resolution calling for a Constitutional Amendment to end corporate personhood, like Richmond, CA did. They’re an oil town, BTW.)

And an aside, to lighten it up with some mystery … While we were going to unconstitutional war with Libya, and Japan was desperately throwing the kitchen sink at their “virtually indestructible” nuclear reactors, a huge BOOM-ROAR-noise set northern Florida aflitter. People could hear and feel it for 100 miles, and they thought it was an earthquake but it didn’t register as one, and it wasn’t a tornado or high winds, and it wasn’t a jet breaking the sound barrier, because it lasted for 20 minutes.

Here’s some scary home-filmed footage, and when you watch it, remember, this isn’t Cloverfield, this is real life. It sounds an awful lot like the Earth singing — skip to 4mins of the latter link if you want the good kind of chills, and to be reminded of the beauty of this ride. Here’s another, of Jupiter singing.

You won’t get demoralized, will you? If you do, the terrorists have won. And we need you. The show’s about to start. Everybody’s tuning up. Even the Cloverfield monster.

28th Amendment for the Separation of Corporation and State, please. Please. ::stabs pillow::

screengrab of maritime activity March 17-ish, 2011. Sure looks like boats applying the poisonous dispersant/accelerant/anti-personnel weapon Corexit in circles, is why the eagle-eye watchdog screengrabbed it in the first place and discovered the new spill. Say it with me: HANDS OFF OUR LAND AND WATER, F**KTARDS

And now, here are a metric ton of latest Gulf Coast / Gangster Party-centric links in red, pointing to the fact that ONLY WIND, WATER, SOLAR, AND HEMP WILL NOT TURN AROUND AND BITE US IN THE ASS. We collected these before the recent Japan / Libya / new Gulf spill triple-whammy … and now more than ever it seems appropriate to decentralize government, money, and power, and to imagine a world where humanity powered itself with fuel that didn’t kill anyone:

AL.com: 9 dead dolphins found since Saturday in Alabama and Mississippi (Also, 32 human miscarriages were confirmed in the Plaquemines Parish area of LA alone, including one woman whose fetus was dead inside her for a month, so it gave her toxic septicemia and she is no longer with us. So if you figure in the number of women who won’t talk about their miscarriages, and multiply that by the surface area of the Gulf Coast, no doubt hundreds of expectant mothers were crushed this year by the loss of their children-to-be. Thanks, BP. )

(c) John Wathen, Hurricane Creekkeeper. All images on this page were taken either march 19 or 20, 2011

Algal Biomass.org: Alternative Energy: Why the President’s portfolio approach will make us leaders —

The U.S. Air Force is the largest consumer of petroleum in the military. Every day, it burns more than 7.0 million gallons of oil. And where do we get that oil? In 2010, the U.S. spent more than $300 billion to import 4.2 billion barrels of oil, largely to make fuels needed to meet military and civilian transportation demands. One of the greatest threats to our economic and national security is the need to secure foreign oil. So, when President Obama confirmed a commitment to develop domestically renewable petroleum replacements from biomass, also known as bio-crude, he put a stake in the ground that alternatives are not just good for the environment, they’re critical to our national and economic security. Bio-crudes are compatible with the DoD’s current fleet of tanks, ships, and planes, which will be in use for the next 30 years.” 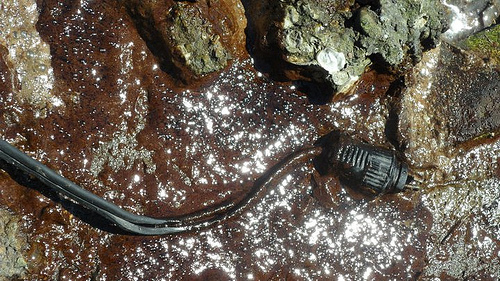 FOSL: Shock: Well-known LSU coastal scientist dies at 54 from unknown illness – Often spoke about how oil was going to be “coming back” (that brings the total to at least EIGHT suspicious deaths by outspoken and/or Deepwater-connected scientists who wouldn’t shut up because of BP hush-money)

BBC News: Gulf spill’s effects ‘may not be seen for a decade’

The initial phase of the BP/Synthetic Genomics deal will focus on identifying and describing the naturally occurring organisms and their natural biological functions that thrive in subsurface hydrocarbon formations, including petroleum, natural gas, coal, bitumen, shale, and carbon dioxide. Synthetic Genomics will utilize unique technologies including environmental genomics and multiplex microbial culturing techniques. The overarching goal is to explore and understand subsurface microbial processes. Such an understanding would enable hydrocarbon quality enhancement or increased production. BP and Synthetic Genomics will seek to jointly commercialize the bioconversion of subsurface hydrocarbons into cleaner energy products. The second phase of the BP/Synthetic Genomics program will be a series of field pilot studies of the most promising bioconversion approaches.”

Synthetic Genomics: Hydrocarbon Recovery (read this carefully and connect the dots. they are experimenting with methods to “grow” hydrocarbons in their beds. think about this in connection with the Macondo “Well from Hell,” and the reports of the first well drilled and capped months before the Deepwater rig blew. Why did it buck and snort and blow up real good? hmmm) 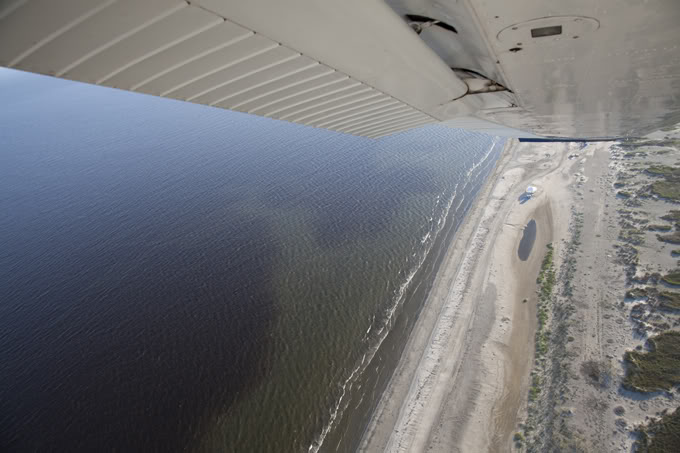 “Rhamnolipids are surfactants, or oil dispersants, and they are not restricted by the U.S. Environmental Protection Agency (EPA). How interesting. … Rhamnolipids are secreted from Pseudomonas aeruginosa, a bacterium. In case you don’t remember the significance of Pseudomonas, let me quote Dr. Riki Ott once again:

“To make things a little scarier, some of the oil-eating bacteria have been genetically modified or otherwise bio-engineered to better eat the oil – including Alcanivorax borkumensis and some of the Pseudomonas.” — September 17, 2010; Bio-Remediation or Bio-Hazard? Dispersants, Bacteria and Illness in the Gulf .

Pseudomonas aeruginosa is a common bacterium which can cause disease in animals, including humans. The symptoms of such infections are generalized inflammation and sepsis. If such colonizations occur in critical body organs, such as the lungs, the urinary tract, and kidneys, the results can be fatal. It is also able to decompose hydrocarbons and has been used to break down tarballs and oil from oil spills.”

Reuters: Gulf Coast dolphin death toll rises to nearly 60 (now it’s up to more like 170, officially, which means at least 10 times that number of dolphins dead in the ocean — and they’re still washing up on beaches like Destin and Navarre, much to the chagrin of Spring Break)

FOSL: Cleanup worker having SEIZURES after diagnosed with benzene poisoning — Coughing up chunks of meat, black stuff coming out of nose & ears, lost half of eyesight

“Feeling More and More Like It Can’t Be Fixed” – by Denise Rednour, tireless citizen journalist and BP muck-filmer:

ProjectGulfImpact: Selling shrimp with oil in their lungs, at the Gulf State Pier in Gulf Shores. 2-22-11

OilSpillAction: PHOTO UPDATE FROM HORN ISLAND: Too many dead horseshoe crabs to count; remnant oil both on the beach surface and buried as deep as 4 feet

Common Dreams: Friends of the Earth briefs Congress on billions in potential savings from ending polluter giveaways (“Moglen called attention to the billions that can be saved by eliminating giveaways to the oil and coal industries and other polluters. … “Being fiscally responsible and environmentally conscious are not mutually exclusive; we can save money by protecting the environment — we can save over $15 billion dollars a year by ending subsidies for fossil fuels,” Moglen said. “If funding is going to be cut from the budget, let’s do it there, and not by taking away nutritional support from little kids.”) 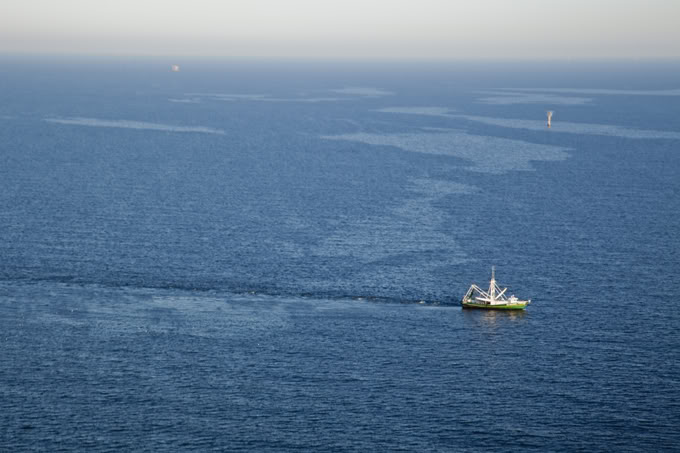 NOLA.com editorial: Deepwater Horizon explosion stemmed from a failure of management (‘a cavalcade of blunders)’

MotherJones: “They were purposefully trying to deceive everyone” (‘finally an honest scientist’)

BP Pays a Crony (“BP’s much publicized compensation fund for Gulf oil spill victims has received over 91,000 requests for final damage settlement payments from people and businesses across the Gulf but has only issued one. Give them credit, it was for a hefty sum of $10 million dollars but it comes with one caveat; the recipient is an existing BP business partner that was paid only after BP intervened on their behalf.”) 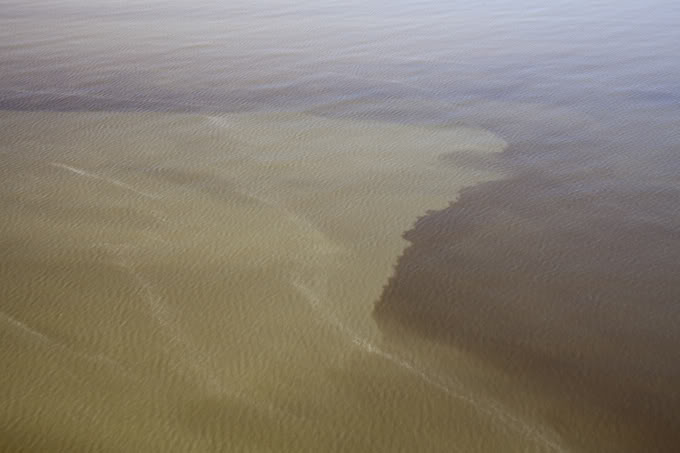