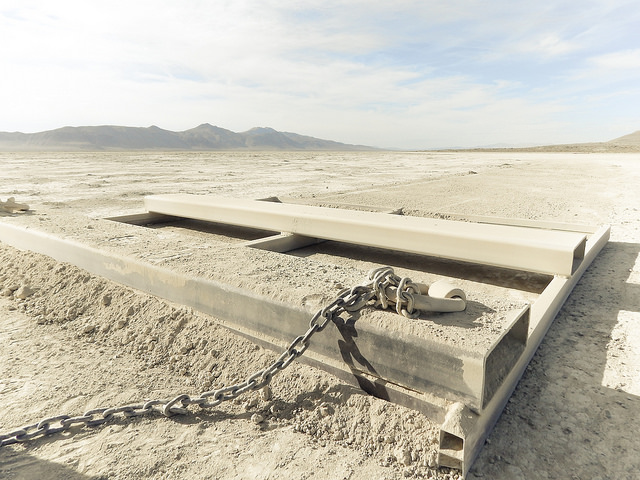 Black Rock City got hit with some harsh wind this year. Not as apocalyptically near-tornado-level wind as the playa can whip up, but still, 2015 saw enough consistent and prolific dust to monopolize half the Burning Man experience for some people.

What this means for Playa Restoration, in general, is dustpiles on the moon.

It means the DPW stays busy combating dunes across the city’s site. On line sweeps, we look for little serpentines with rare MOOP treasures in them, and we rake long arrays of fine-dust layers until they smooth out and/or blow away.

Then there are the larger dunes where structures and fences once stood, which need to be manhandled and sometimes even heavy-machined.

Dunes have become Bobtuse and crew’s bailiwick. Bobtuse, DPW’s prime dunebuster since after he started volunteering in 2000 or 2001, drives his truck in large loops and pirouettes all day, pulling a huge flat heavy metal square thing. 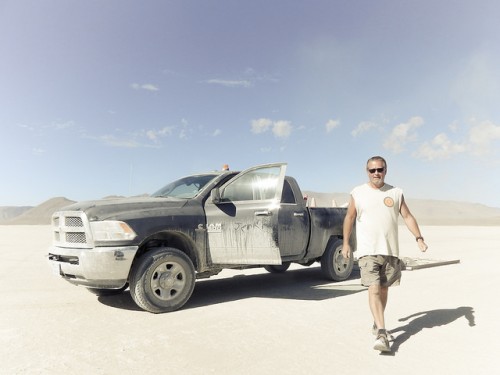 “You might get seasick riding with me,” Bobtuse says on a recent crackling-hot day on playa. This is his sixteenth Playa Restoration, and he hasn’t gotten woozy yet.

“Sometimes it’s worse for the passenger than the driver,” he offers. Luckily, this writer doesn’t get seasick either, but on Bobtuse’ crazy-eights route, we begin to feel that euphoric and yukey carnival-ride feeling.

The dunebuster he’s pulling behind him with a chain smashes through tiny hills of playa — BOOSH — making miniature dust devils and wee windstorms as he tears down the dune. This huge tool on a truck chain, a square of metal-with-rebar welded by the DPW’s metal shop at the Ranch as usual, resembles a spiderweb.

no offense, but this buster will kick the sand in your face

Pen-and-paper note-taking becomes chicken scratch and we soon give up on writing and dunebusting simultaneously. It’s like mowing the lawn, this writer points out.

“Mhm, except it’s kinda random and irregular.” Bobtuse calmly drives in crazy patterns while we hold on to the truck’s oh-shit bar. Perhaps his relaxed and balanced manner, cowboy-succinct speech, and ninja-level composure are all due to his job requiring him to shake and spin his organs up all day long.

We reminisce about the first dunebuster Demilitia, then head of metal shop, created around 19-2000 or so. Her dunebuster prototype was basically a big chain to drag.

After the chain, Bobtuse says, Demilitia fabricated “one that was a railroad tie on a chain — but it was too heavy for most trucks to pull. It was hard even on the bigger engines. Then there was a big fence chain kinda thing with a tire for weight on top of it, but that one created dust. It was just abrasive.

“This one, we’ve had it for a while. There’s two edges that push — so it doesn’t really dig, it just displaces. We also have a new one now — more heavy duty. Because it’s heavier, it pushes more instead of just floating.” (That’s the one Mr. Blue’s driving this year.) 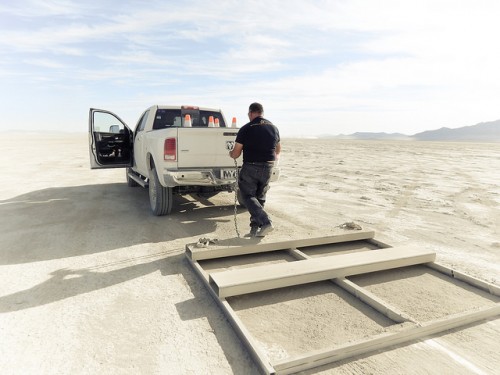 square new kid on the playa (the dunebuster, not Mr. Blue)

We ride out to the fence, with Bobtuse busting big dunes marked with Special Forces cones along the way. We are instructed to drive right behind him, right in his dust line, because to the left of us is unbusted dune, and to the right of us is fluffy, flat, freshly-busted playa.

Bobtuse explains that the fluffy stuff he exposed will now blow away to reveal naked playa underneath — if the DPW staff members remaining on-playa don’t tamp it down with our tire tracks. “There are certain things wind and rain will do,” Bobtuse says. “Heavy rains will diminish where the drag was.”

We ask Bobtuse if staff members and art cars are doing the playa a favor by driving over and flattening down the soft and crusty wavy bits. Not the big dunes, but the squishy bits where it’s not just naked cracked-up playa. “Not over just-busted dunes,” he says. “But tamping down is good.” 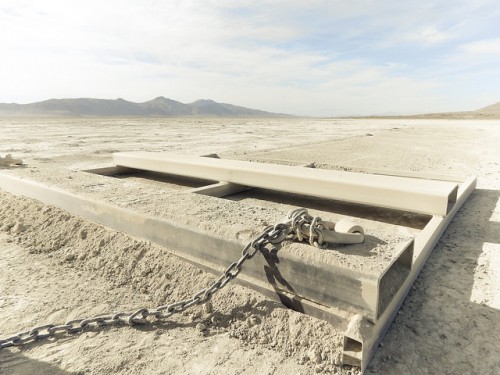 D.A., DPW’s head of Playa Restoration, lights up when he talks about fence line dunes: “Anything else on the playa is small potatoes,” he says.

“Nothing stands for as long as fence does. It’s our biggest structure, and we got pummeled by dust storms this year. It holds our trash in but can also create a dune, depending on prevailing winds.”

[Note: Trash is collected several times a day along the perimeter of the trash fence during the event, both by DPW and by saintly participants who deserve all of DPW’s praise. They’re make-it-better-yourselfers and model citizens; thanks to them.]

“This year we had a dune problem near greeters where a bunch of cars were parked at the fence,” D.A. says. “Not only was the dust bouncing off the cars, but also the fence. It created dunes nine inches high, a foot in some places. There are no dunes bigger than the ones Bobtuse is killing here [at the fence line]. And I’m throwing all my energy at it.” 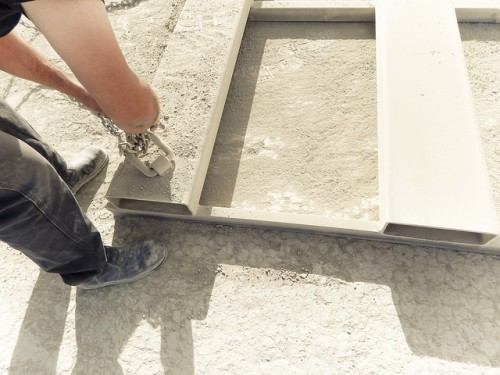 Is there MOOP stuck in the dunes?, we ask. “Sometimes,” D.A. says. “Glitter isn’t anywhere in our top ten of MOOP items, even though everyone always guesses it is. Last year it was astroturf because we got a lot of rain.” [So try lightly singeing your astroturf and carpet edges with a blowtorch before you come out here to nip that problem in the bud.]

“Our number one MOOP item is wood chips,” D.A. continues. “From everything we’ve seen, we should put new emphasis on tarping under firewood and construction sites, and sweeping up daily.”

It starts to seem important to us to learn about how dust travels out here in the Black Rock Desert. And, once it travels onto your campsite, how it’s good to rake through dunes and MOOP them out each morning, flattening them back so they don’t pile up.

Hey, make it a fun chore for someone at your camp who needs alone time. Think of it as a Zen garden experience combined with an Easter egg hunt for maybe trash, or a nifty piece of lost bling.

And sorry kids, Bobtuse is the only man who gets to do donuts on playa without a talking-to and/or a ticket from the rangers afterwards. He’s out there now, busting the freshly-rained-on-and-dried dunes, doing his best to leave no trace for all of us who don’t have the truck and the huge flat heavy metal square thing.

“The playa’s flat,” D.A. says. “We like the playa flat. We do our best to bust the dunes down until it’s flat. The BLM monitors it, we monitor it, we make sure it becomes flat again.”