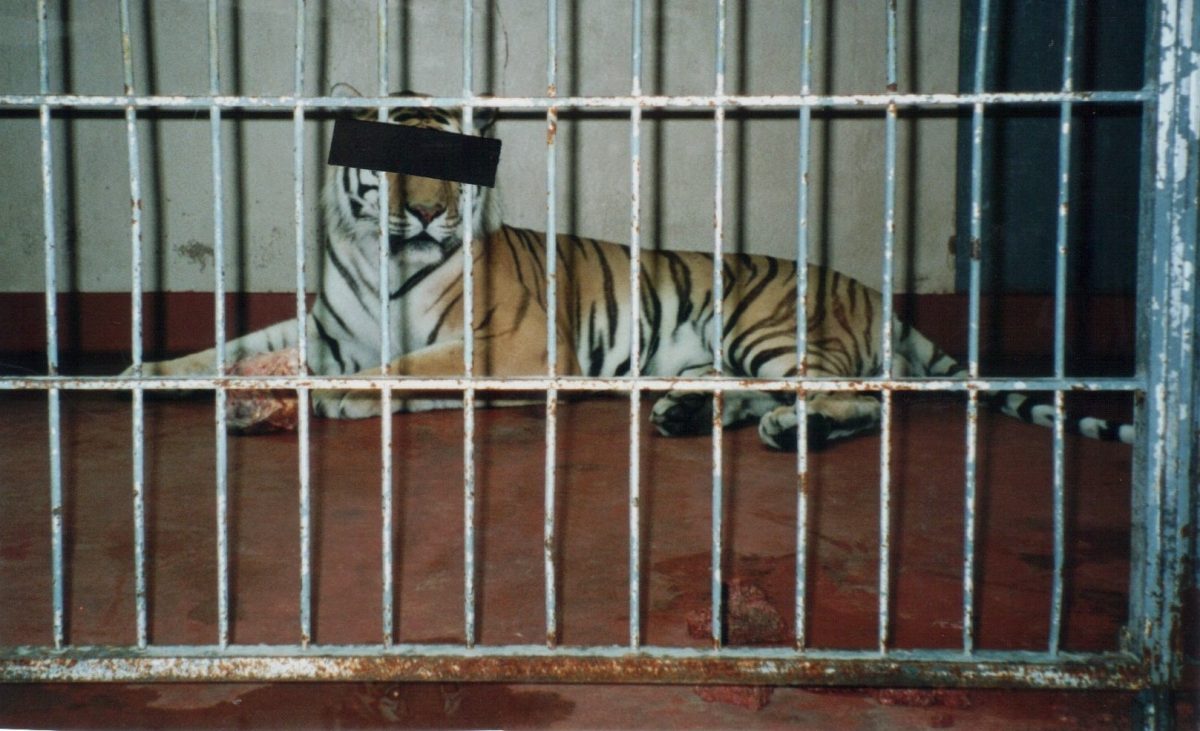 The New Zoo Review: Carnage in the kitchen, stink fights, and the case for natural selection
by Summer Burkes

“Dilettante” column originally published at the turn of the century on 07.28.1998 in the SF Bay Guardian. Re-intro August 2018 here.

IN THE YEAR 1796, in one of the roving sideshows of the era, Americans laid eyes on an elephant for the first time. A giraffe, or “cameleopard” as they were called then, arrived in the States in 1837, and gorillas didn’t cross the water until 1850.

Back in the days before photographs, TV, and National Geographic, some of these “curiosities” shows presented human and animal marvels and peculiarities for the masses, exhibiting Siamese twins along with lions and tigers and bears. Medical science and urbanization eventually split these ragtag freak shows into tame, organized circuses and zoos.

But, judging from the clowns on stilts, talking robots, carousels, and roller coasters just inside the San Francisco Zoo gates at the first annual “Twilight ZooFari,” some people still know that the circus/zoo combo is a sure-fire winner.

and also a robot, because it’s the bay area after all

In the car on the way to the zoo, my friends and I wondered why childless people like us even bother to cough up the cash to go to it instead of just watching the Animal Channel or surfing the Web.

Viewing anything live and three-dimensionally is obviously more satisfying than watching it onscreen, but as we discussed the things we wanted to see (wild dogs being fed, rams battling, tigers gnawing on bones, monkeys flinging their droppings at onlookers) we experienced an epiphany: the zoo isn’t so much about education as it is about potential carnage. One friend asked, Homer Simpson-style, if the zoo served beer. We all crossed our fingers. 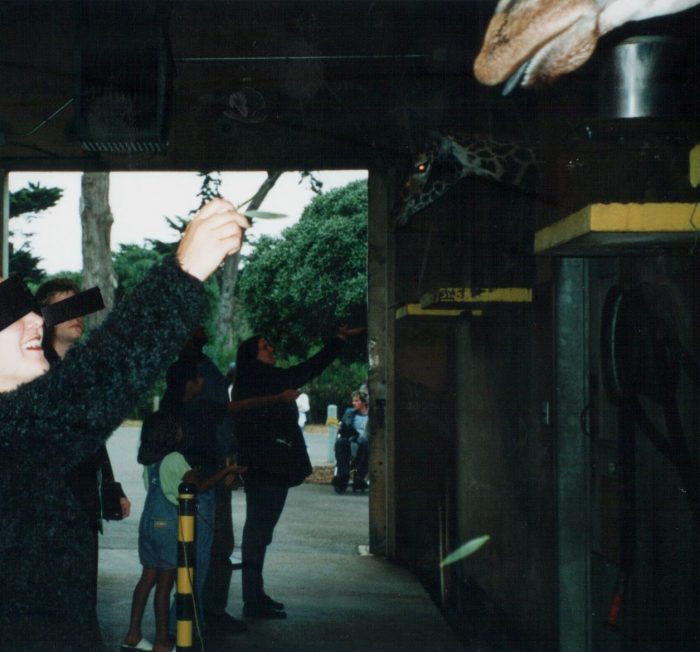 The Twilight ZooFari, a fund-raiser for the privately controlled yet terminally mismanaged zoo, gave curious Homo sapiens a chance to safely view magnificent and funny-looking creatures from home and abroad, but with the added thrill of exclusivity, unlocking the zoo gates after normal hours and open-housing some usually off-limits areas.

In the surprisingly small zoo ‘kitchen,’ catering trays with horse meat, bones, squid, eggs, dead mice, and fish parts all artfully arranged on beds of lettuce (whatever happened to Baby Jane?) sat next to huge bags of feed and grain. An erasable board showed the animals’ daily ‘menu’. 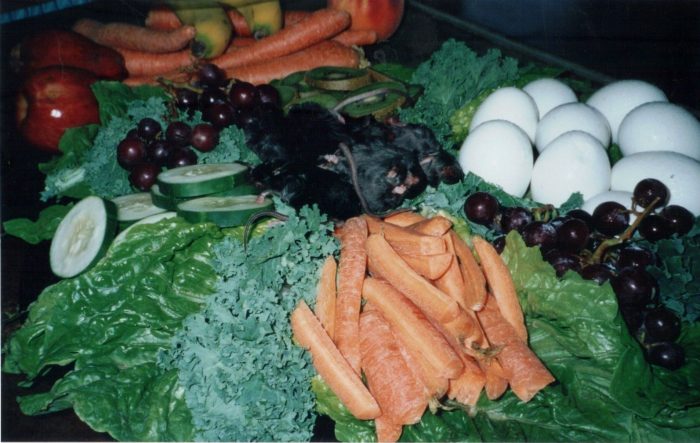 The ‘hospital’ exhibited X-rays of birds that had swallowed bolts, nails, and fishhooks; stuffed neon tigers laid on gurneys with oxygen masks attached to their cute little yaps.

A barbecue (oh, the irony) was held in Rainbow Meadow, live world music acts performed, and one guy in a tux strolled the grounds, playing guitar while wearing a lion’s head and paws. Step right up, ladies and gentlemen.

Some things I learned at the zoo: Only one male koala can wander in the eucalyptus field at the time, or else fisticuffs ensue. Lorikeets, normally little chirpy, happy, multicolored birds, get really testy when a flock of ducks flies overhead. Orangutans, when confronted with a playground more elaborate than any I ever experienced at school, would rather chew on Rubbermaid trash cans than play in it. A tapir’s natural habitat is, evidently, a desolate suburban yard with a cyclone fence, pool, and sprinkler.

People generally refer to all animals as ‘he,’ even pregnant ones and lionesses. Hippos are in the horse family, and they have two enormous teeth that stick straight out from the middle of the bottom of their mouths. African wild dogs sometimes regurgitate their hastily swallowed food for puppies and lame or older dogs. 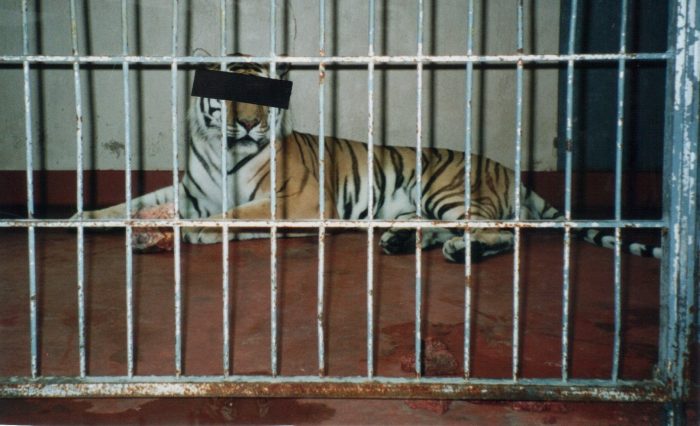 Female lemurs are dominant over males, and the males shake their tails and spray at each other in “stink fights.” Kids still shout the word “retard” at the physically challenged. Rhinos were invented by George Lucas for the Star Wars trilogy and later discarded. And the zoo does have beer. And garlic fries.

Sandwiched in between a 28-year-old who had never been to a zoo (really!) and a nature girl who actually knew what a cassowary was, I felt I had a pretty good grip on the breadth of the adult zoo experience, until we went to the polar bear exhibit. Two people, obviously on a date, watched as the giant arctic bear lounged and panted, appearing from his erratic lip movements to be eating rocks or coming down with Parkinson’s disease.

“I think he’s too cold out here,” said the woman.

“Yeah, he probably wants to go back in that heated little room back there,” her date agreed.

I prayed that natural selection would prevent those people from breeding in the wild. Excuse me, sir – do you have a license for those opposable thumbs?

This is the 19th piece in my “twenty years ago this week” project; this post’s intro is here, and Dilettante’s first installment is here. 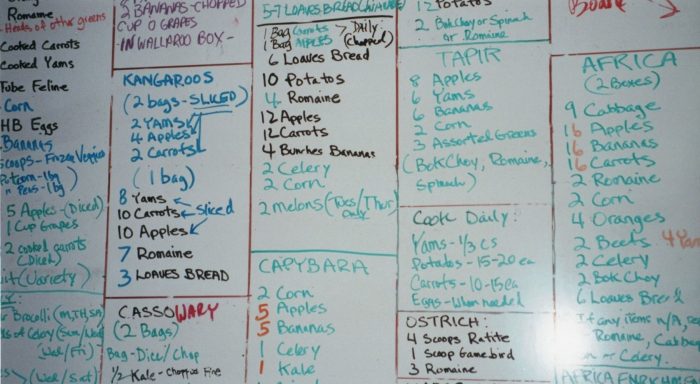